You can revoke your agreement at any time. Information on this and even more on the subject of cookies and the various web services can be found in our Privacy Policy.

Strange noises in the garden at night? Unfamiliar cars in the courtyard entrance? With an outdoor surveillance camera, you can always see what’s happening around your house, in your courtyard, garden, horse stable, or anywhere else on your land – regardless of whether there’s an imminent threat or you simply want to feel completely safe. The Hama outdoor camera is equipped with a solar panel and battery and offers numerous applications when combined with the app and voice control. Of course, the smart camera is protected from water jets in accordance with IP65, and can therefore be mounted to an external façade without concerns.

Use the Hama Smart Home app to call up the live view of the surveillance camera on your smartphone display: in colour and in high-resolution Full-HD quality – you won’t miss a thing. From a safe distance, you can first check what the unfamiliar car is doing in the courtyard entrance – perhaps the driver is just wanting to turn around. The children are enjoying a birthday party in the garden but you want to go indoors to prepare some snacks and drinks. Now you can do so without a guilty conscience, as the live view enables you to keep an eye on the children at the same time (this also applies to puppies and kittens, for instance, or anything else that occasionally gets a silly idea in its head). 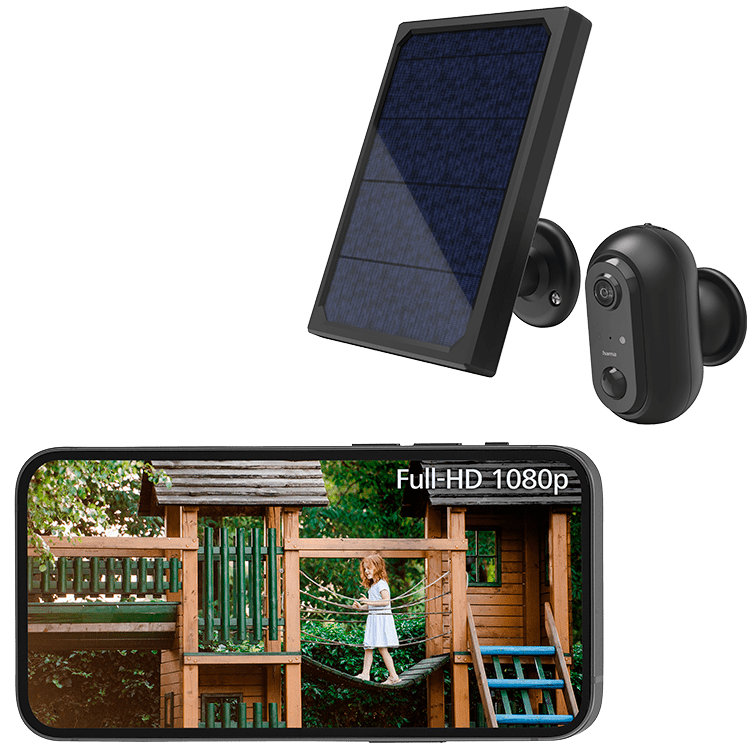 Sometimes something or someone scurries over your property so quickly that you don’t even realise it – be it your daughter creeping out to a party at night, or a burglar taking advantage of your absence. The surveillance camera reacts to movement with a passive infrared (PIR) sensor. PIR sensors detect objects that emit heat and therefore infrared radiation, that is, people, animals, but also cars; the sensor itself does not generate heat, which is why it is called ‘passive’. If something scurries, creeps or positions itself within the 130-degree field of view, you get a notification on your phone and can take immediate action if there is an imminent threat – at the same time, the WLAN camera takes a photo. You can also start recording video automatically – it is then stored either on the SD card or in the cloud for subsequent viewing.

The combination of motion detection and other smart products offers major benefits: You can link a WLAN LED lamp and/or a smart alarm siren to the camera – if the camera detects movement, the outside light switches on and the siren sounds the alarm. Firstly, a burglar is immediately deterred if caught in the bright light. But apart from security, this also brings convenience – the courtyard is lit up as soon as you drive in with the car, for example, or enter the property through the garden door.

Whatever the area you want to monitor or the hour, you can use the WLAN camera anywhere, since the integrated batteries do not require an external power supply. All you have to do is mount the camera – forget the hassle of laying power cables. The battery lasts up to four months and then has to be recharged. To recharge the battery, remove the camera from the magnetic mount, charge the camera batteries with the supplied USB charging cable on a PC or laptop or with an additional USB power supply unit at the socket and carry on with your camera surveillance.

Thank to the solar panel, the surveillance can operate completely independently in some areas. If the solar panel constantly receives enough solar power, the batteries will be charged. You can even keep a close eye on grounds or locations that are inaccessible or rarely visited. With your solar surveillance camera, you will know who is enjoying the strawberries in the allotment or what is causing a commotion in the stables. 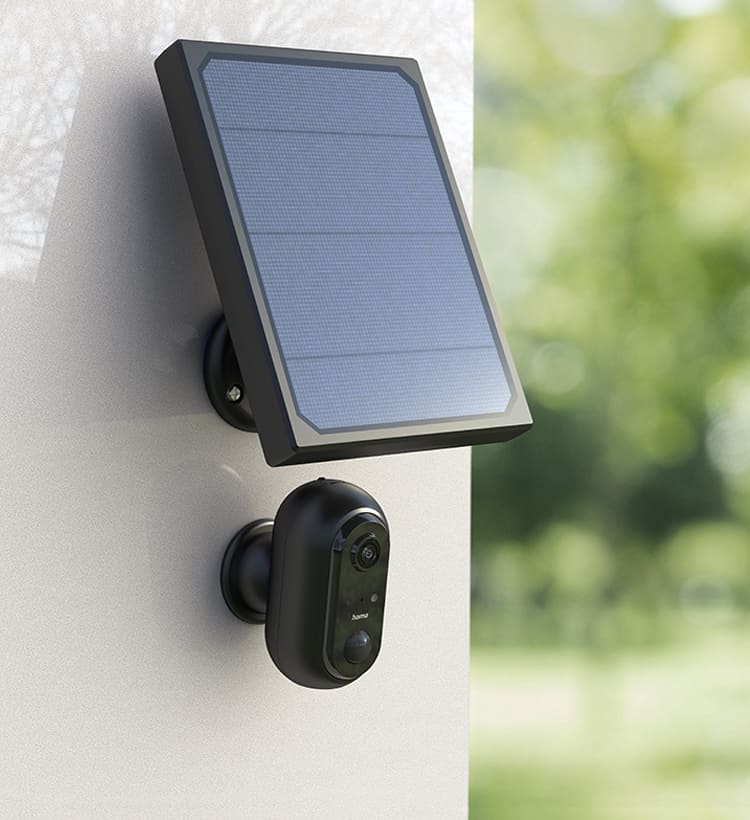 Of course, you cannot keep an eye on your property 24/7 using your smartphone screen.. Therefore, when the camera detects motion, it can automatically start recording video, which is stored either on a 128-GB SD card or in the cloud. You can use these video clips to find out later on what happened in front of the WLAN outdoor camera. Besides exposing offences such as intrusion, theft and vandalism, this likewise offers convenience: For example, you can see where and how the postman has left your parcel, and don’t have to look in all possible places, such as the garage or summer house, when you get home from work.

Perhaps you have suspected for some time that a raccoon is getting into the bins at night? Then simply lie in wait at your smartphone display – this is more thrilling than being at the cinema. The infrared lighting enables an excellent view even at night – regardless of whether it’s a raccoon, burglar or your revelling children.

Speaking of the postman: The door bell rings, but you would like to check who’s there before opening the door. Simply take a glance at the live view. Of course, this works not only when you’re at home, but also when you’re away. You can then use two-way audio to tell the postman that you’ll be back from shopping in ten minutes, and that he may leave the parcel in front of the door. The camera surveillance image is transmitted to the live view, and you can use the speakers built into the camera and the app on your smartphone to communicate with the visitor. In the same way, you can also ask unwanted visitors, from a safe distance, to leave the property immediately. 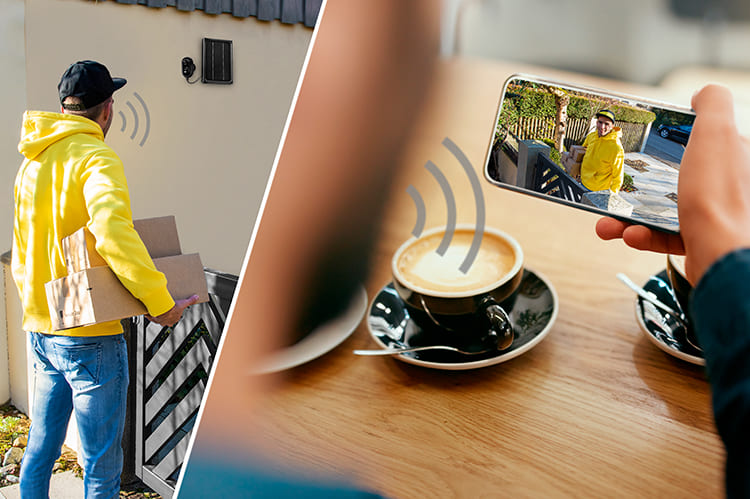